The past seven years have been the best in Leicester City's history - but is the fairytale coming to an end?

An against-all-odds Premier League title success, a run to the Champions League quarter-finals, Wembley wins in the FA Cup final and Community Shield, reaching the last four of a European competition - Foxes fans have had a lot to celebrate.

But nothing lasts forever and those supporters are now fearing a relegation battle.

Following Sunday's 5-2 defeat at Brighton, Leicester are bottom with just one point from six matches amid growing unrest in the stands, a lack of confidence on the pitch and an under-pressure manager unhappy at not being able to strengthen his squad.

Match of the Day presenter Gary Lineker, a lifelong Leicester fan and ex-Leicester player, wrote on Twitter that it was "worrying times for us Foxes fans", adding that the team were "awful defensively and seem to be playing a different system every 45 minutes".

He was not the only one unhappy. At full time at the Amex, a banner in the away end was displayed, saying "Rodgers out".

Brendan Rodgers has been manager since February 2019 and in his three full seasons with the club, Leicester have won the FA Cup for the first time, won the Community Shield, reached the semi-finals of the League Cup and the Europa Conference League and also finished fifth, fifth and eighth in the Premier League.

After the loss to Brighton, he said: "The results are down to me, I'm the manager, and we need to work even harder and get that first win.

"My focus is on the football and trying to give the players the confidence and structure to our game to get back to winning.

"We'll arrive with a new energy, focus and hopefully confidence next week. You put the hard yards in now and work, not shirk responsibility."

Asked if he was the right person to take Leicester forward, Rodgers replied: "I will do my very best. From the first day that's all I've tried to do.

"The decision is always someone else's. I'll keep looking to improve them and try to get that first win.

"It's a challenge but you can only keep optimistic and keep focusing on the good aspects. It's not a magic formula. You have to work hard."

Rodgers has the second highest win ratio of Leicester's managers in the Premier League, only behind Claudio Ranieri, who was sacked nine months after guiding the club to the league title.

"It could get worse before it gets better but you have to stick with Brendan Rodgers, he has the experience and pedigree to get them out of this," said Sidwell.

"You don't want to have a knee jerk reaction to call for him to get out.

"They need to stick together, they've showed glimpses they can cause some damage but they need to be consistent.

"There's lots to worry about for Leicester, it seems the players are not united at the moment."

Leicester's start to the season has not been helped by losing goalkeeper Kasper Schmeichel for £1m to Nice and then central defender Wesley Fofana to Chelsea in a £70m deal, with Rodgers frustrated at the club's transfer activity.

"With the greatest respect, we haven't had the help in the market this team needed," he said after the 1-0 home loss to Manchester United on Thursday.

"This isn't the club it was a couple of years ago."

However, they still have a lot of the players from two seasons ago that helped the club finish fifth, including Harvey Barnes, Jonny Evans, Kelechi Iheanacho, James Justin, James Maddison, Caglar Soyuncu, Youri Tielemans and Jamie Vardy.

After the loss at Brighton, Rodgers said the players needed to remind themselves how good they have been.

"A team with confidence can maybe see it through but the fellas, bless them, are suffering with confidence," said Rodgers. "When that happens the game becomes difficult. But they gave everything, the fight and the running.

"It's a challenging period and has been from the start of pre-season. We have to keep fighting.

"This is the hard yards now and we have to put it in and stay strong. The team is very much together and working hard. Football can change very quickly. We need to keep looking for that result and the performance to build confidence." 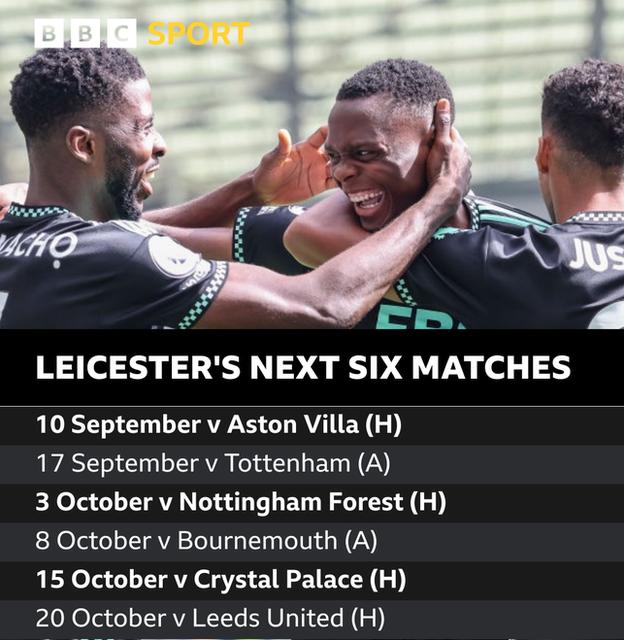