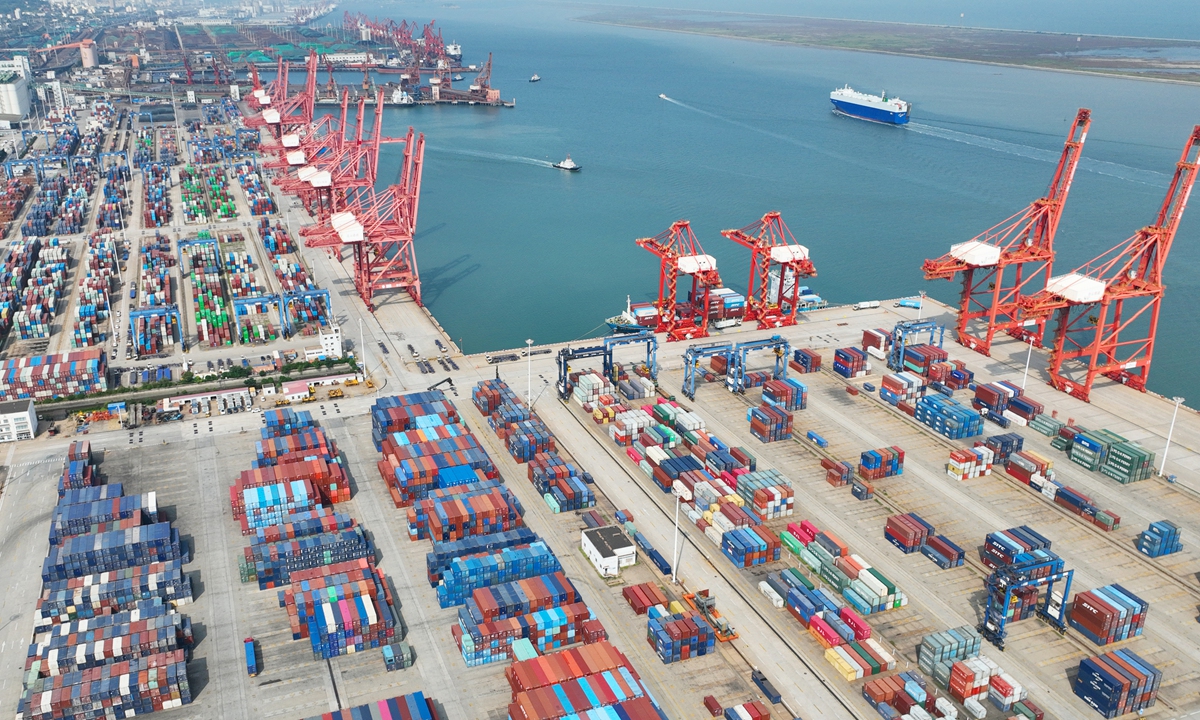 A view of a port in Lianyungang, East China's Jiangsu Province on September 7, 2022 Photo: VCG

China's exports extended double-digit growth in August despite a siginificant slowdown from the pace in July, official data showed on Wednesday, underscoring the resilience of the world's biggest trading nation at a time when global trade faces pressure amid rising geopolitical tensions and disrupted industry and supply chains.

According to data released by the General Administration of Customs (GAC) on Wednesday, the country's foreign trade totaled 3.71 trillion yuan ($531.64 billion) in August, up 8.6 percent on a yearly basis.

Exports increased 11.8 percent, slowing from the 23.9 percent year-on-year growth seen in July, and imports rose 4.6 percent, down from 7.4 percent in the previous month.

Though the slowdown in pace is significant, the growth still shows resilience amid a series of domestic and external challenges, experts noted.

Hu Qimu, chief research fellow at the Sinosteel Economic Research Institute, attributed the slower export growth in August to the high base during the same period last year and weak demand in Europe and the US, both are facing serious economic woes.

"European countries and the US - China's major export destinations - are facing potential recessions, leading to a slowdown of growth in external demand," he told the Global Times on Wednesday.

"The fast growth in the country's exports of machinery reflects the optimization of China's export structure, as well as the sound cost performance of Chinese goods amid high inflation overseas," Zhou said.

ASEAN remained the top trading partner, accounting for 15 percent of China's total foreign trade between January and August. China's trade with its top three trading partners - ASEAN, the EU, and the US - grew 14 percent, 9.5 percent, and 10.1 percent year-on-year, respectively.

Meanwhile, China's trade with the 14 other Regional Comprehensive Economic Partnership (RCEP) economies was up 7.5 percent, during the same period, according to the GAC.

"Exports are expected to be less of a driver of China's economy for the rest of the year, which is also due to weaker external demand, as production overseas gradually resumed while recession risks grew," said Hu.

As the impact of the pandemic wears off, exports are unlikely to keep growing at a particularly high rate and will return to normal growth, Hu added.

For years, China has been reducing the dependence of its GDP growth on foreign trade, which has played a particularly strong role in China's economic growth, as China is a major exporter of large sum of intermediate goods and consumer goods amid the outbreak of COVID-19, said Hu.
On August 31, an executive meeting of the State Council, the cabinet, stressed the implementation of stabilization measures to expand effective demand and consolidate the foundation for economic recovery.

To better implement the follow-up measures, the Ministry of Commerce will take steps to stabilize foreign trade and investment and spur consumption, including accelerating the development of new forms of business, making it more convenient for trade enterprises to grab orders and supporting the export of new-energy vehicles, Li Fei, assistant minister of commerce, said at a press briefing on Monday.

UBS economists led by Wang Tao forecast that China's GDP growth rate is expected to reach 3 percent in the third quarter along with the easing of strict anti-COVID-19 measures and the effect of policy support, according to a note sent to the Global Times.