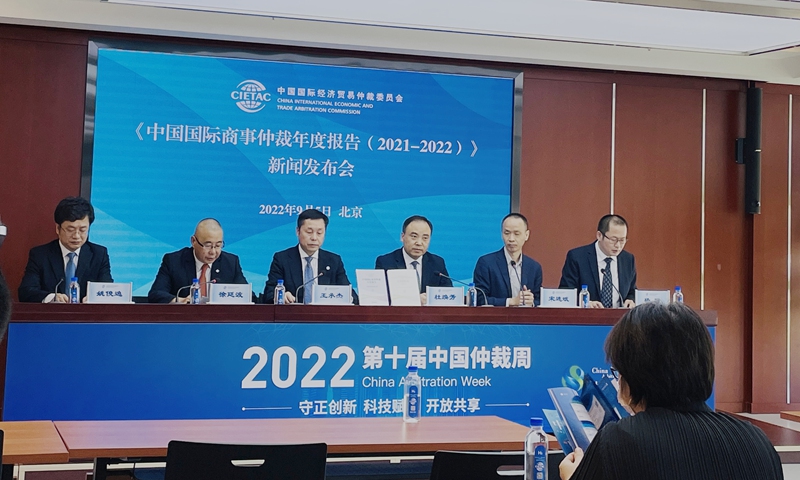 Efforts have been made in arbitration cooperation between China and Association of Southeast Asian Nations (ASEAN) to deepen their economic and trade relations and facilitate regional connectivity, as well as with members of the Regional Comprehensive Economic Partnership (RCEP).

China International Economic and Trade Arbitration Commission (CIETAC), which ranked among top five most preferred arbitration institution in the world in 2021, inaugurated an ASEAN Trial Center of CIETAC in Nanning, Guangxi Zhuang Autonomous Region on August 16, as one of the latest efforts by the CIETAC to improve arbitration work.

"We have established this trial center to better serve ASEAN and RCEP regional cooperation," Wang Chengjie, Vice Chairman and Secretary-General of CIETAC, said on Monday during a press conference for the release of the Annual Report on International Commercial Arbitration in China (2021-2022).

Wang said that CIETAC will take the opportunity to take ASEAN and RCEP member countries' cooperation on dispute resolution to a new level, facilitate the development of the new economy, and provide the necessary backup guarantees for the building of an even closer China-ASEAN community with a shared future.

According to the report, there were 1,352 commercial arbitration cases involving overseas companies in 2021. Of which, CIETAC has accepted 636 foreign-related cases and 136 Belt and Road Initiative-related cases. There were 61 cases where both parties were non-Chinese, and a total of 93 countries and regions were involved in jurisdictions, including South Korea, the UK, the US, Singapore, Germany, Japan, Switzerland, India, Russia, Indonesia, Pakistan, the Cayman Islands and the British Virgin Islands.

They were officially listed as online dispute resolution (ODR) providers of Asia-Pacific Economic Cooperation (APEC) and were listed on APEC's official website on May 1, 2022.

The move is of positive significance in enhancing the international influence of China's arbitration institutions in internet arbitration and better serve cross-border commercial dispute resolution for the micro-, small- and medium-sized enterprises, according to the Ministry of Justice.

CIETAC is one of the major permanent arbitration institutions in the world, which resolves international, foreign related and domestic commercial disputes through arbitration. CIETAC was set up in 1956 under the China Council for the Promotion of International Trade (CCPIT).

Over the past 60 years, CIETAC has been committed to providing independent, impartial and efficient arbitration legal services for Chinese and foreign entities. According to the China International Commercial Court, CIETAC has heard more than 40,000 international arbitration cases in total.