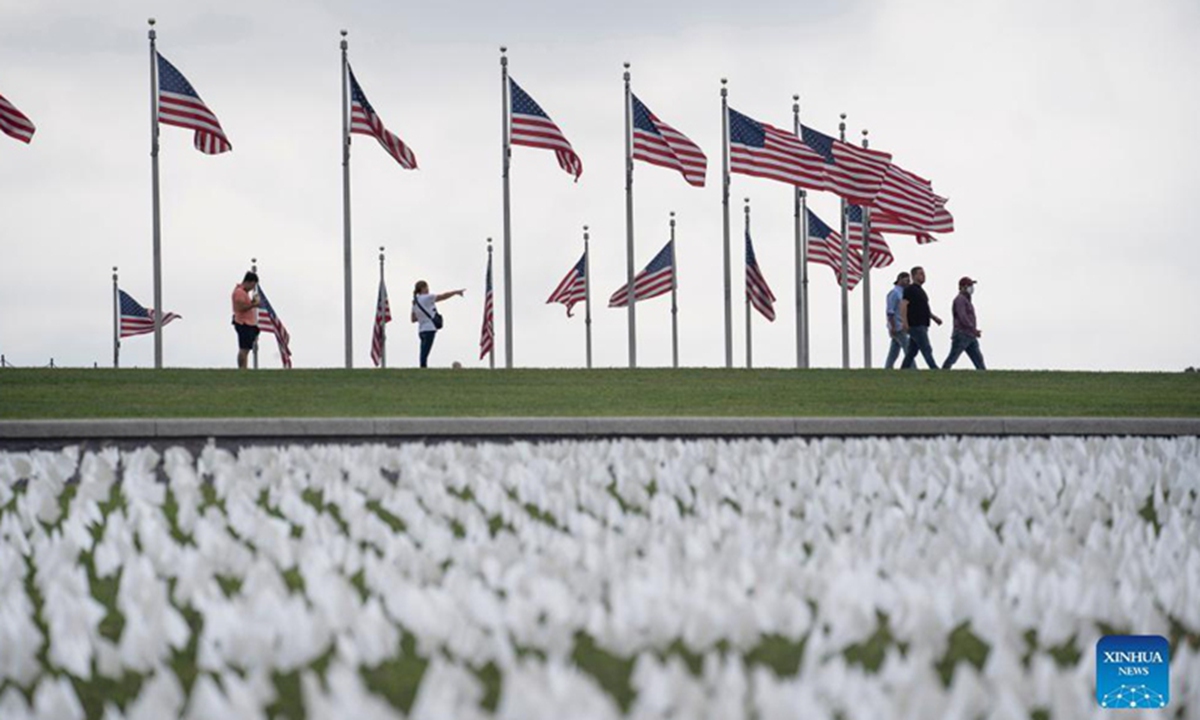 White flags are seen on the National Mall in Washington, D.C., the United States, on Sept. 16, 2021.Photo: Xinhua

US life expectancy continued its historic decline for the second straight year, provisional government data showed recently. The massive decline over that span, from 2019 to 2021, was by 2.7 years - putting life expectancy at 76.1 years and marking the worst two-year decline in nearly a hundred years.

According to the Centers for Disease Control and Prevention (CDC), the hits to life expectancy are being driven by the ongoing COVID-19 pandemic that has killed over 1 million people in the country. The US has by the highest death toll in the world from COVID-19. The second biggest reason for the decline in life expectancy is "unintentional injuries" which include things like drug overdoses.

This data reflects the reality that the US is a dangerous place with a higher-than-average mortality rate compared to other developed countries. In fact, as a pre-print article titled "Missing Americans: Early Death in the United States, 1933-2021" claims, "half of all deaths under 65 years and 91 percent of the increase in under-65 immortality since 2019 would have been avoided if the U.S. had the mortality rates of its peers." Racial disparities are especially evident.

This article posits that the country has much higher mortality rates among children and working-age adults than peer countries, sometimes at a rate of even three times higher. It's these deaths that contribute the most to another key metric, years of life lost (YLL), which totaled 25 million in 2021 alone.

Indeed, while a significant number of older adults perished to COVID-19 so far into the pandemic, the US outpaced other comparable countries in younger demographics. The largest of these, according to the paper, was in working-age adults. It has been speculated in numerous reports that the ongoing worker shortage in the US may be due, in part, to the fact that a significant amount of the working-age population died or is now disabled from COVID-19.

However, the paper also notes that even if excess deaths from COVID-19 were eliminated altogether that the US would still have a higher load of excess deaths than comparable countries. That's because of "unintentional injuries," e.g., things like the ballooning opioid crisis, gun deaths and the obesity epidemic.

Meanwhile, the consequences of this YLL disparity for the US compared to peer countries are profound. In addition to the loss of life, this means, for example, leaving young and elderly dependents behind with immense social disruption and trauma. An October 2021 CDC report found that more than 140,000 children in the country lost a primary or second caregiver during the pandemic at that point.

It may be easy to pin all the blame of US declining life expectancy and ballooning YLL on COVID-19 but this would belie the profound structural issues that make the US such an unnecessarily dangerous place. The US desperately needs to implement public health and social policies that look out for the good of citizens and address the root causes of the public health crises, primarily declining economic opportunities, systemic racism and a lack of basic investment in infrastructure, including basic public health needs.

Instead, we have seen what essentially amounts to a dereliction of duty by public health officials and politicians. For example, the CDC has failed to meaningfully implement scientific-based quarantine policies for those that test positive for COVID-19 - and that is apparently due to a lack of social safety nets like mandatory paid sick leave.

We don't see investments in education to help make US workers more competitive in a globalized economy but instead an attempt to scapegoat other countries, formerly Japan and now China, as using unfair practices. This leads to more destitution for US workers while also driving global conflict, which in turn engenders more suffering for the entire planet - not just citizens of the US.

Without a serious reversal of failed US policy to a more human-centered direction, we can expect to see continual drops in life expectancy and compounding YLL. This will be accompanied by attendant social consequences that will, in turn, reinforce the conditions that cause such immense suffering to the American people.

The author is a Prague-based American journalist, columnist and political commentator. opinion@globaltimes.com.cn