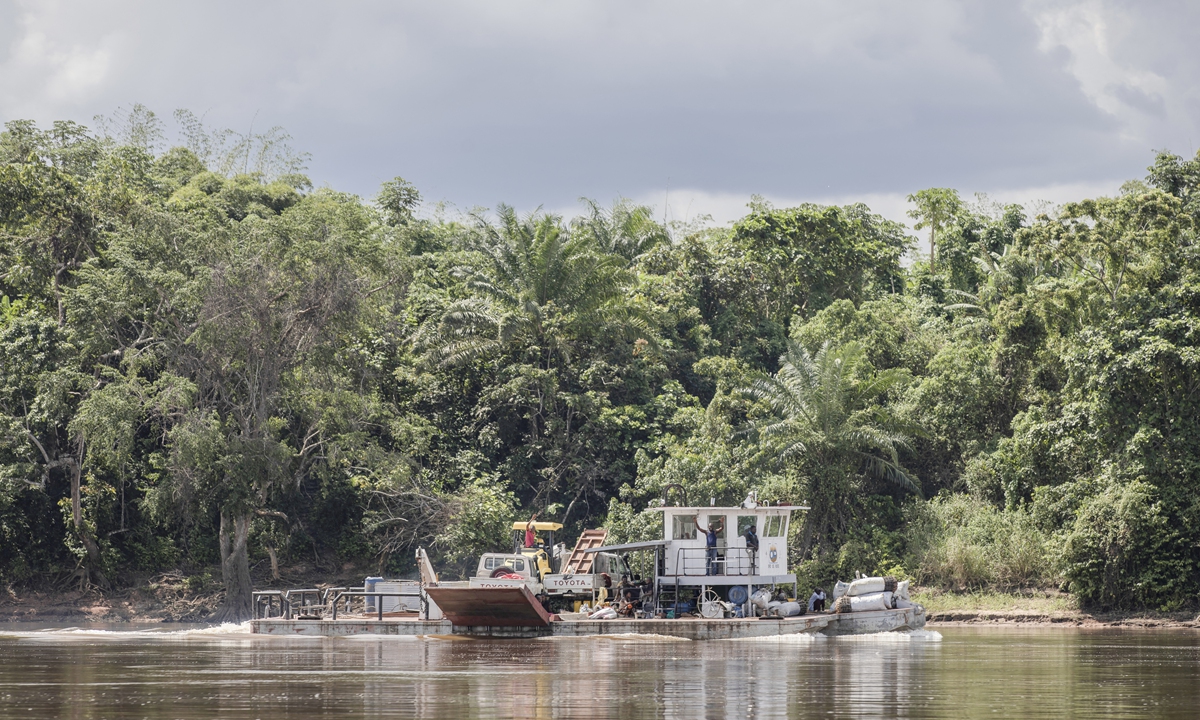 A barge with passengers and merchandise travels on the Congo River to the city of Kisangani, Tshopo province, northeastern Democratic Republic of Congo on August 31, 2022. Photos: AFP

Spanning several countries in central Africa, the Congo Basin rainforest covers an immense area and is home to a dizzying array of species.

But there are growing concerns for the future of the forest, deemed critical for sequestering CO2, as loggers and farmers push deeper inside.

Scientists at the Yangambi Biosphere Reserve in the DRC's Tshopo province are studying the rainforest's role in climate change - a subject that received scant attention until recently.

Yangambi was renowned for tropical agronomy research during the Belgian colonial era.

This week, it also hosted scientists as part of meetings in the DRC dubbed pre-COP 27, ahead of the COP27 climate summit in Egypt in November.

Thomas Sibret, who runs the CongoFlux CO2 measuring project, said that flux towers are common worldwide. But until one was set up in Yangambi, there had been none in Congo, which had "limited our understanding of this ecosystem," he said.

Around 30 billion tons of carbon are stored across the Congo Basin, researchers estimated in 2016. The figure is roughly equivalent to three years' global emissions.

Sibret said more time is required to draw definitive conclusions from the data gathered by DRC's flux tower, but one thing is certain: The rainforest sequesters more greenhouse gases than it emits.

Paolo Cerutti, the head of the Center for International Forestry Research's operations in Congo, said this phenomenon was good news.

In Latin America, "we're starting to see evidence that the Amazon (rainforest) is becoming more of an emitter," he said.

"We're betting a lot on the Congo Basin, especially the DRC, which has 160 million hectares of forest still capable of absorbing carbon," Cerutti said.

But Cerutti warned that slash-and-burn agriculture poses a particular threat to the future of the rainforest, pointing out that half a million hectares of forest were lost in 2021.

With the DRC's population of about 100 million people is set to expand, many worry the forest is in dire threat.

Jean-Pierre Botomoito, the head of the Yanonge area about 40 kilometers from Yangambi, said that he once thought the forest was inexhaustible.But "here, there are no trees," he said.

Villagers in his once-forested region now have to travel long distances along narrow muddy paths to find tree-dwelling caterpillars - a local delicacy.

Charcoal used for cooking in the absence of electricity and gas is similarly hard to obtain.

There are efforts to help farmers in the remote and impoverished region to make a living while sustaining the environment.

A large project, for example, trains farmers to rotate cassava and groundnut crops between fast-growing acacia trees. Farmers can harvest the acacia trees to make charcoal after six years.

Experts also encourage the use of more efficient kilns to produce more charcoal and teach loggers how to select which trees to fell.

A scientist checks the devices installed on the trees in the Yangambi Biosphere Reserve, northeast of the Democratic Republic of Congo, on September 2, 2022.Photo:AFP

Jean Amis, the head of a local farmers' organization, was enthusiastic about the project.

"We didn't necessarily have the right practices" before, he said.

Helene Fatouma, the president of a local women's association, says fishponds on the edge of the forest now yield 1,450 kilograms of fish in six months, as opposed to 30 previously.

But not all residents of the surrounding area support the various schemes.

Some people believe that the flux tower is stealing oxygen, for example, or that it is a prelude to land appropriation.

Researchers often find dendrometers - devices that measure tree dimensions - vandalized, and some traditional chiefs think the forest will grow back by itself without outside interference.

The Indonesia-based Center for International Forestry Research says that resistance to the schemes can be overcome through raising awareness.

But he said there needs to be more financing for locals, who have seen little benefit from promised funds to protect the rainforest.

Assumani pointed as an example to the $500-million deal to protect the Congo Basin rainforest, signed by president of the DRC Felix Tshisekedi and former British prime minister Boris Johnson in Glasgow in 2021.

"Commitments are all very well, but they need to be disbursed," he said.

IPEF unlikely to succeed, for it serves US’ own interests
Unemployed Filipinos down by 5.2% in July, PSA says