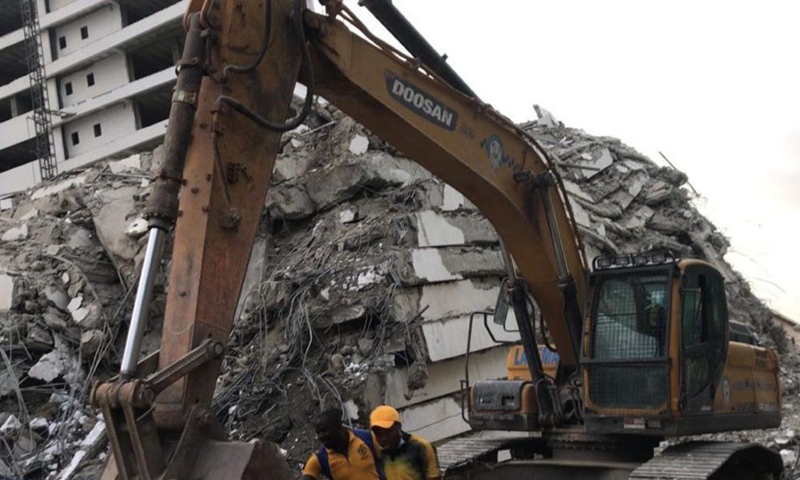 Rescuers work at the site of a building collapse in Lagos, Nigeria, on Nov. 1, 2021. At least four people were killed after a 21-storey building under construction collapsed Monday afternoon in the city of Lagos, Nigeria's economic hub, an emergency management official said. (Photo: Xinhua)

The death toll in a building collapse in Nigeria's commercial capital Lagos rose to five on Monday after three more bodies were pulled out from the debris, the emergency service said.

Two people were reported died after a seven storey building under construction collapsed in Lagos in the early hours of Sunday, as Lagos State Emergency Management Agency noted.

It was the latest building tragedy in Africa's most populous nation where many reside in dilapidated structures and construction safety regulations are often ignored.

"Another three bodies have been extricated from the rubble, bringing the fatalities to five," the Lagos State Emergency Management Agency noted in the statement released to the public.

The building was being constructed next to a hospital in the neighborhood of the city Oniru, as the agency's chief executive Olufemi Oke-Osanyintolu noted.

The agency said its operatives had been working with other rescue officials "for over 24 hours" at the site of the tragedy.

"The painstaking process is ongoing," the agency added, suggesting that more bodies could still be found.

It was not exactly clear how many people were trapped at the time of the collapse in an upscale commercial district of the city.

No reason was given for the collapse.

Building collapses are frequent in Africa's most populous country, where regulations are poorly enforced and construction materials often substandard.

Enforcement of safety regulations and use of shoddy materials have been highlighted since November 2021 after a high-rise building under construction collapsed in the Ikoyi district of Lagos.

The incident killing at least 45 people.

Since 2005, at least 152 buildings have collapsed in Lagos, according to a South African university researcher investigating construction disasters.