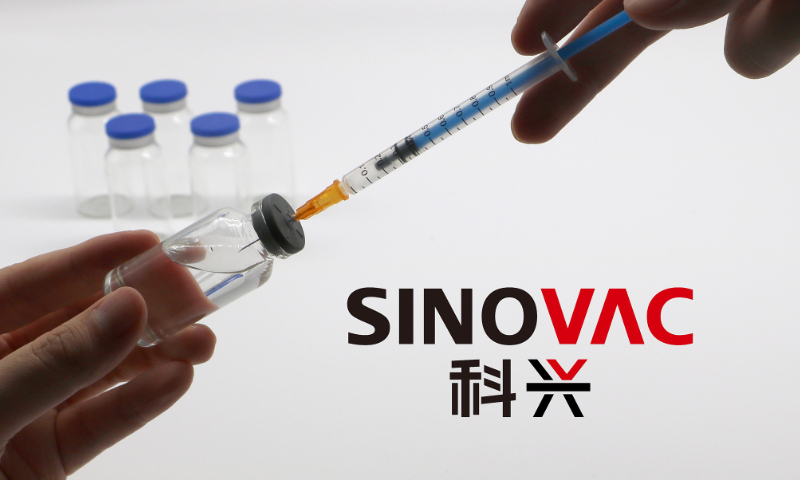 Chinese vaccine manufacturer Sinovac said it is expecting to submit safety and immunogenicity data from the clinical trials for its Omicron-specific candidate to related national authorities and apply for emergency use, the Global Times learned from the company on Monday.

Sinovac kicked off the trials in the mainland and China's Hong Kong region in April, the company said in a statement sent to the Global Times.

The news came as many Chinese cities are witnessing surging cases due to Omicron mutations, including Hong Kong, Shenzhen in South China and Chengdu in Southwest China.

On Sunday, 303 confirmed cases and 1,317 silent virus carriers were reported across the country, according to data from the National Health Commission.

Meanwhile, the Public Health Institute of Chile has approved a clinical study to evaluate the safety and immunogenicity of the Omicron-specific candidate and another trivalent COVID-19 inactivated vaccine candidate from Sinovac as a fifth booster shot, according to the statement.

The latter is the first polyvalent COVID-19 inactivated vaccine that has been approved for clinical trials, read the statement.

Pre-clinical trial studies on animals have shown that the two candidates were both safe and effective, according to the statement. Sinovac's Omicron-specific candidate had clinical trials in the mainland and Hong Kong in April.

The trivalent candidate consists of three COVID-19 variants - the original variant, the Delta variant and the Omicron variant, the company said in the statement.

The trials will be a multicenter, randomized, double-blind and active-controlled design. A total of 826 adult volunteers will be recruited and divided into two groups: one group of 576 people who have two Sinovac original inactivated shots and two other booster shots of mRNA or adenovirus vaccines; the other group of 250 people will have four Sinovac shots, according to the statement.

Each volunteer will be given a fifth shot of original Sinovac inactivated vaccine, or the trivalent candidate, or the Omicron-specific candidate, according to the statement.

The trials will provide solid data for the research and development of vaccines specifically for COVID-19 mutations, read the statement.

In August, Chile's public health institute approved usage of the Sinovac inactivated vaccine on children aged between 6 months and 3 years old, making it the second region after Hong Kong to approve the usage, according to the statement.

So far, the Sinovac vaccine has been used on children and adolescents in 14 countries and regions, protecting more than 130 million underage people, read the statement.