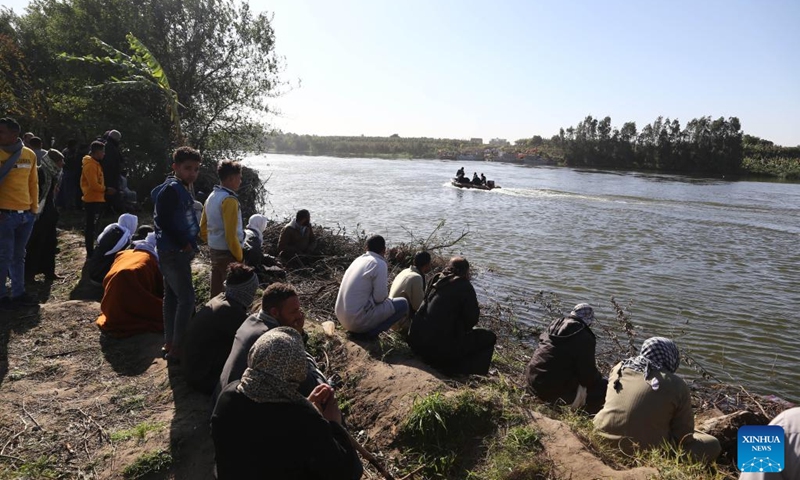 Onlookers watch as rescuers search for missing people from a truck that plunged into the Nile River in Giza, Egypt, on Jan. 11, 2022. .(Photo: Xinhua)

Residents of a Nile island in greater Cairo woke up in recent weeks to find officials taking measurements of their houses, a final step before enforcing demolition orders.

Since then, people from Warraq, some of whom have been on the working-class, agricultural island for generations, have renewed efforts to oppose a mega development project that would see the island's character and their homes erased.

"Just give us a part of the island, even if it is behind a wall," one resident in his 30s told AFP, requesting anonymity due to security concerns.

"We will not leave," he added, insisting he has all the proper documentation for his house.

Warraq, located in Giza governorate and home to around 100,000 people, is just a ferry ride away from Cairo's traffic-choked streets.

The government in late July evoked images of Manhattan as it unveiled an almost billion-dollar plan for the six-square-kilometer island's redevelopment, featuring glittering skyscrapers, helipads and marinas.

Authorities "gave some residents four days to leave their homes" in late July, a resident in his 50s told AFP, also requesting anonymity for security reasons.

The project for the capital's largest island was reactivated under President Abdel Fattah al-Sisi, whose other "mega projects" include a sparkling new capital rising from the sands 50 kilometers east of Cairo.

The Warraq resident in his 50s, who works in the agriculture sector, said he was not against relocating but demanded fair compensation.

One-third of Egypt's 103 million people live in poverty, according to World Bank figures, with another third vulnerable to becoming destitute.

Zaazaa says the Cairo redevelopments aim to prepare the city "to accommodate the new capital."

Some residents have been relocated to "mega public housing projects on the periphery," but most find "other informal areas a better solution," he added.