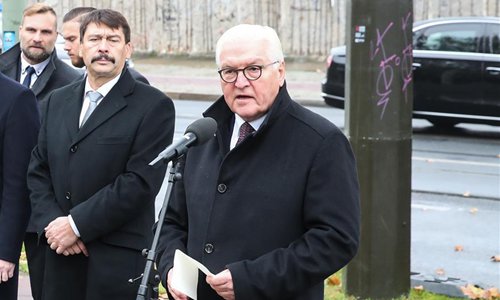 Germany's President Frank-Walter Steinmeier admitted on Sunday it was "shameful" that it took five decades for Berlin to agree compensation for the bereaved families of Israeli victims in the 1972 Munich Olympics attack.

"That it took 50 years to reach this agreement in the last days is indeed shameful," said Steinmeier, standing next to his Israeli counterpart Isaac Herzog, with whom he will be attending a commemoration ceremony in Munich on Monday.

A row over the financial offer previously made by Berlin to victims' relatives had threatened to sour the ceremony, with families initially planning a boycott.

But a deal was finally agreed on Wednesday offering 28 million euros ($28 million) in compensation. It also - for the first time - sees the German state acknowledging its "responsibility" in failings that led to the carnage.

On September 5, 1972, eight gunmen of the Palestinian militant group Black September stormed into the Israeli team's flat at the Olympic village, shooting dead two and taking nine Israelis hostage. West German police responded with a bungled rescue operation in which all nine hostages were killed, along with five of the eight hostage-takers and a police officer.

The Games were meant to showcase a new Germany 27 years after the Holocaust but instead opened a deep rift with Israel.

In 2012, Israel released 45 official documents on the killings, including specially declassified material, which lambasted the performance of the German security services.

Relatives of victims have over the years battled to obtain an official apology from Germany, access to official documents and appropriate compensation beyond an initial 4.5 million euros.

As recently as just two weeks ago, relatives of the victims said they were offered 10 million euros.

"I came home with the coffins after the massacre," Ankie Spitzer, whose husband Andre Spitzer was killed in the hostage-taking, told AFP.