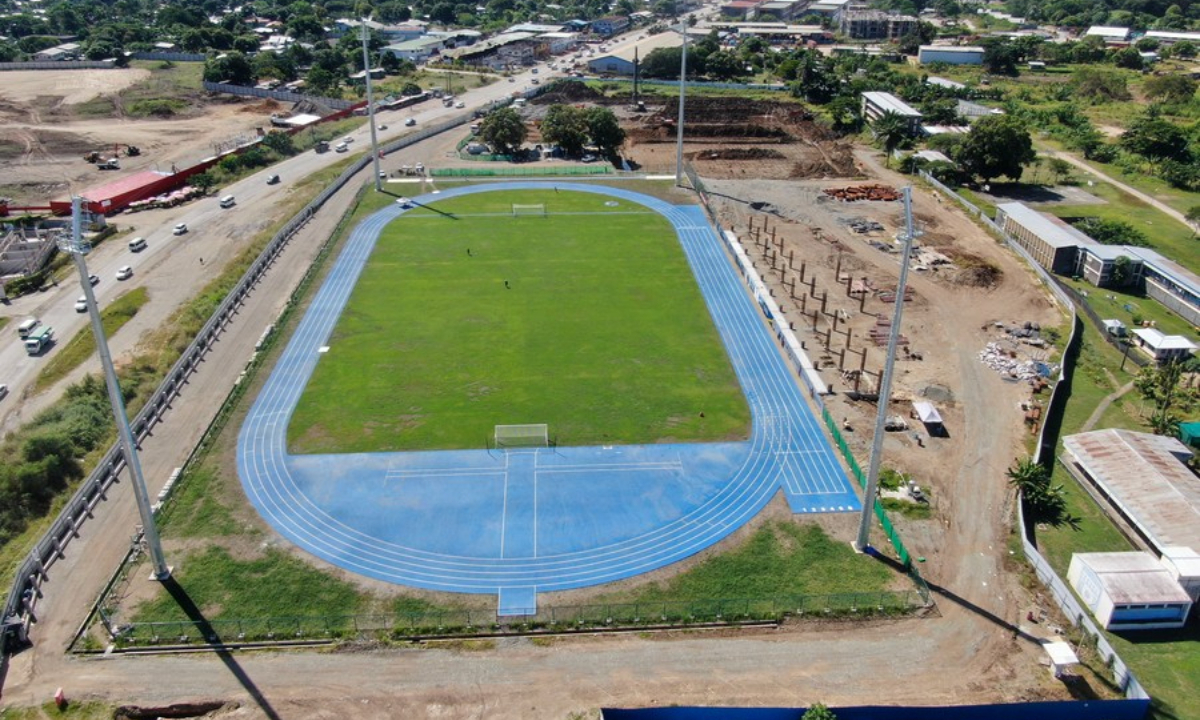 An aerial photo taken on May 4, 2022, shows the Chinese-built athletic track and the football pitch under a Stadium Project for the 2023 Pacific Games in Honiara, the Solomon Islands. Photo:Xinhua

The Chinese Foreign Ministry said on Monday that China's assistance to South Pacific island countries never attaches any political conditions, and many projects aided by China have progressed well. The remark was made by Mao Ning, a spokesperson of the ministry.

In developing relations with South Pacific island countries, China has always adhered to mutual respect, equal treatment, win-win cooperation, openness and inclusiveness. "Our assistance to the island countries is sincere and effective, and never attaches any political conditions," said Mao.

Projects such as the Enga Provincial Hospital in Papua New Guinea and China-Samoa Friendship Park in Samoa have been successfully completed and handed over. Projects such as the Tobwaan te Rikirake Park Renovation Project, Solomon Islands National University Dormitory Building, Vanuatu Pentecost road project (phase 1) and others have begun, according to the ministry.

The progress is the result of sincere cooperation between China and the island countries to jointly overcome the fallout of the pandemic, and the vivid practice of the concept of building a community with a shared future for mankind in the South Pacific island countries, Mao said.

The US, claiming it will strengthen its presence in the South Pacific this year, has taken new actions. The White House said on Friday that US President Joe Biden will host the first ever US- Pacific Island Country Summit on September 28-29, 2022.

"The summit will reflect our broadening and deepening cooperation on key issues such as climate change, pandemic response, economic recovery, maritime security, environmental protection and advancing a free and open Indo-Pacific", said the White House.

Reuters reported that the White House had invited 12 Pacific Islands countries, including the Solomon Islands. The US has strengthened its contacts with Pacific island countries since the Biden administration took office.

Politico.com reported on Friday that the US has spurred a flurry of US diplomatic outreach to the Solomons and other Pacific island nations to "reverse perceptions that the US has abandoned the region".

Daniel Kritenbrink, assistant secretary of State for East Asian and Pacific Affairs, and Kurt Campbell, the US National Security Council's Indo-Pacific coordinator, said during their April tour to the Solomon Islands, Fiji and Papua New Guinea "to advance a free, open, and resilient Indo-Pacific," the State Department said then.

In June, the US launched the Partners in the Blue Pacific initiative with Australia, New Zealand, Japan and UK to "forger closer connections with Pacific governments."

Still, there is skepticism about the effectiveness of Biden's renewed efforts to reach the region. Some analysts said the Biden administration's "random access" strategy has produced few meaningful results.

After the US realized the strategic importance of South Pacific, it began to position the region as a battlefield for games with China, tried to strengthen its influence there, and colluded with Australia to counter China in the region, Chen Hong, president of the Chinese Association of Australian Studies and director of the Australian Studies Centre at East China Normal University, told the Global Times.

"But the region is very dissatisfied with the US promoting its anti-China strategy," Chen said, adding that the containing China strategy by the US in the region is meaningless, especially when South Pacific island countries are reluctant to be dragged into the game by the US, while China is conducting mutually beneficial cooperation with the region.

Mao, the spokesperson, said that for a long time, China has implemented a large number of aid projects in Pacific island countries that meet their actual needs, which has effectively promoted local economic development and improved people's livelihoods, which are unanimously welcomed by the island countries.

China will continue to unswervingly strengthen practical cooperation with the island countries in various fields, so as to bring more tangible benefits to the people, Mao said.