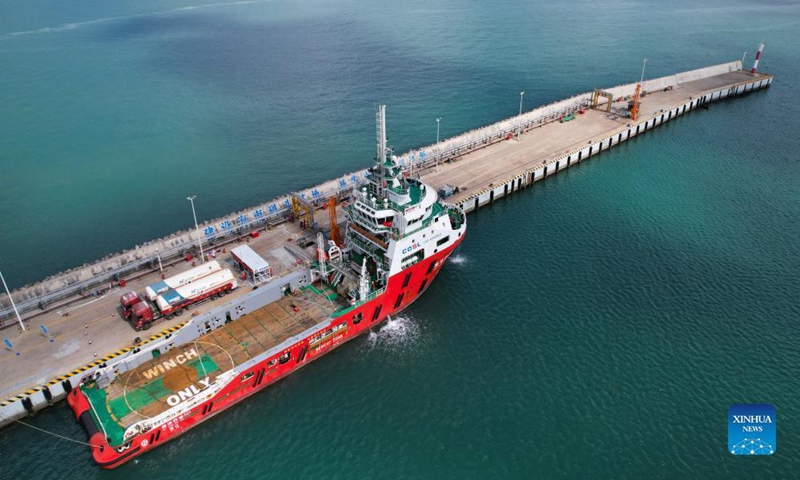 Chinese liquefied natural gas (LNG) companies have increased supplies for overseas market in response to rising demand from clients from Europe and elsewhere, against the backdrop of what could turn into an unprecedented energy crisis.

Worsening energy crunch was aggravated by geopolitical conflicts, inflation and other factors, and rising orders from Europe have pushed global natural gas prices to record highs, which may linger as the winter nears.

Energy industry sources and analysts told the Global Times that Chinese companies are preparing for deals with European clients amid soaring demand there, and some companies saw overseas orders rise by double-digits in August.

As summer ended, the price of natural gas in Europe soared to about $2,500 per 1,000 cubic meters. That was up 2.6 times from the beginning of June, according to media reports.

A large energy company based in China's northwestern Xinjiang told the Global Times on Monday that it is expanding trade with international LNG clients, including those from Europe.

"The biggest difference for us this year is that we export more than we import, and our natural gas export volume has maintained double-digit growth year-on-year in the last couple of months, driven by soaring demand in Europe," an employee said.

The company's imports mostly come from countries like Australia under long-term contracts signed when prices were relatively low.

The person said that trade volume has been rising nearly every month, mainly going to European clients and it plans to further expand imports.

The company declined to comment. In a response to investors at an online platform, the company said its sales are mainly to meet domestic end users, and it also actively develops international market.

Many EU countries are troubled by a dearth of natural gas supply, as people's livelihoods and factory operations have been seriously affected by the shortage.

TTF natural gas futures, the European benchmark, jumped more than 30 percent to above 280 euros ($278) per megawatt hour on Monday, after touching a three-week low of 203 euros on Friday, as Russia's Gazprom reversed its plan to resume flows through the Nord Stream pipeline and shut it indefinitely, citing maintenance requirements, media reported.

Some media claimed that certain Chinese energy companies had purchased natural gas from Russia and re-sold it to Europe, an allegation that has not been confirmed by any domestic companies so far.

The reason why Europeans were able to build up their LNG reserves faster than expected was partly thanks to LNG exports from China, the Nikkei reported.

Wang Yu, a manager with the Russian Asian Union of Industrialists and Entrepreneurs, told the Global Times on Monday that some Guangzhou-based enterprises are actively negotiating with the union for the purchase of bulk LNG, indicating a rising trend for LNG imports.

"Empty bulks will be delivered to Russia's port city Nakhodka, where they will be loaded with LNG before returning to China," Wang said.

In terms of LNG source countries, Australia was China's No.1 supplier in 2021, with a volume of 31.14 million tons, accounting for 39.5 percent. The US came in second with 11.4 percent, followed by Qatar, and other countries such as Russia and Malaysia, industry data showed.

But experts warned that Europe cannot expect Chinese suppliers to cover its energy shortages, given that the total amount of gas that China can export to Europe is limited, compared with other sources like Russia.

"There will be Chinese companies involved in exporting LNG to Europe, but the amount should be small and it can hardly meet the massive energy needs of Europe," Lin Boqiang, director of the China Center for Energy Economics Research at Xiamen University, told the Global Times on Monday.

As a major energy-consuming country, China's import volume has increased year by year, and it has become the world's largest importer of LNG. Its external dependence is close to 40 percent, experts said.

"China's natural gas is also in a tight supply, and the export volume is not large, and it is difficult to solve the crunch in Europe," Lin said, adding that other factors including the shortage of infrastructure such as gas storage tanks and LNG ships have also capped supplies.

As the tight energy supply persists, some European countries have added fuel to the already tense situation by bringing in sweeping sanctions against Russia, their major energy supplier.

Gazprom said on Friday that due to the discovery of multiple equipment failures, the Nord Stream 1 gas pipeline will completely stop transmission until the fault is eliminated, which raised fears of shortages and possible blackouts in the coming months.

Kremlin spokesman Dmitry Peskov told reporters on August 31 that the Russia-targeted sanctions imposed by the EU led to the suspension of the Nord Stream pipeline, TASS reported.

At a regular press conference held by the Ministry of Foreign Affairs on Monday, spokesperson Mao Ning said in response to media questions that relevant countries should make constructive efforts to ease the situation through dialogue and consultation, not the other way around.