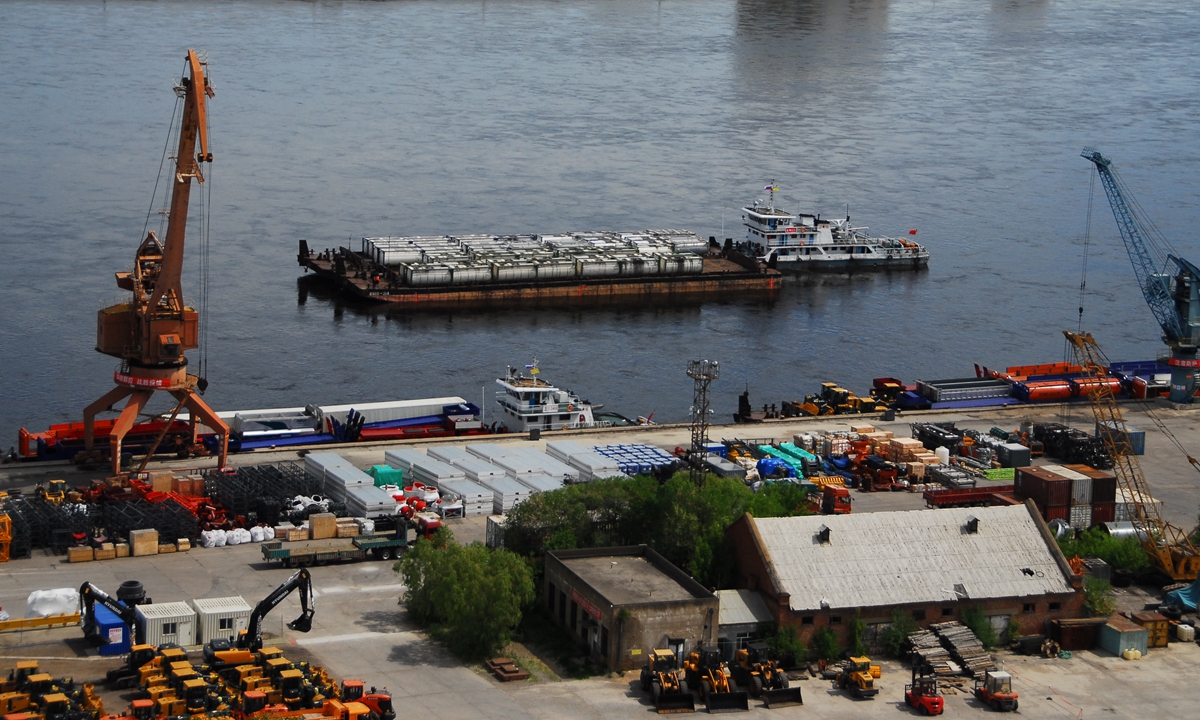 Russia's Far East is witnessing huge opportunities brought by closer China-Russia cooperation, as Russia's economic pivot to Asia receives a sudden boost amid escalating sanctions from the West in the wake of the Russia-Ukraine conflict, delegates and representative at the 2022 Eastern Economic Forum (EEF) said on Monday. Russia's accelerating pivot toward the East is also reshaping the geopolitical landscape, as the formation of a multipolar world is irreversible.

Alexei Chekunkov, head of the Ministry for the Development of the Russian Far East and Arctic, said that his department would make suggestions to the Chinese side to create a free trade zone on the Heixiazi Island, near Fuyuan county, Northeast China's Heilongjiang Province, a border island that links China and Russia, RT reported.

According to the minister, the island could be developed into a project like the China-Kazakhstan Khorgos project, a cross-border cooperation center for duty-free trade between countries.

Also on Monday, the Sputnik news reported that the Russian state development corporation VEB.RF announced plans to invest in projects worth a total of 1 trillion ruble ($16.41 billion) in the next three to four years in the Far East.

A TASS report said that the EEF 2022, to be held on the campus of the Far Eastern Federal University from Monday to Thursday, expects participants and guests from over 60 countries to attend.

Leaders from Myanmar, Armenia, and Mongolia will attend the forum, and prime ministers of India and Malaysia will deliver speeches via video link, Russian media reported.

China's top legislator Li Zhanshu will start a four-nation trip later this week, which includes a visit to Russia, where he will attend the forum, which analysts said demonstrated the firm strategic support from China to Russia.

This marks Li's first official overseas trip since the start of the COVID-19 pandemic, though he frequently held talks with foreign leaders via video link, according to media reports. He's also the highest level Chinese official to visit Russia since the Ukraine crisis began earlier this year.

Russia's economic pivot to Asia is being accelerated by the Russia-Ukraine conflict, but also comes against the backdrop of enhanced connectivity of infrastructure between China's northeastern provinces and the Russian Far East.

Since the announcement of Russia's "pivot to Asia" in 2012, Russia has been steadily increasing its investment in the Far East. At the 2021 forum, Russian President Vladimir Putin said the rapid development of the Far East is a long-term and absolute priority for the Russian authorities, addressing an EEF plenary meeting.

In a February interview, Putin noted that the modernization of the Baikal-Amur and Trans-Siberian railways has begun and their throughput should increase by 1.5 times due to an increase in the volume of transit cargo and a reduction in transportation time by 2024.

According to a TASS report, Putin said the port infrastructure in the Russian Far East is also growing and "all this should further enhance the complementarity of the Russian and Chinese economies."

Russia completed its first rail bridge to China - the Tongjiang-Nizhneleninskoye Bridge across the Heilongjiang River, known in Russia as the Amur River - in April. Media reports are suggesting that the bridge could officially be put into operation before the end of this year, transporting commodities such as iron ore and timber.

The Blagoveshchensk-Heihe Bridge, the first China-Russia highway bridge, opened to traffic in June.

And construction on the world's first cross-border cable car linking Heihe and Blagoveshchensk was also making steady progress, according to media reports.

Against the backdrop of the Ukraine crisis, the EU and NATO continue to impose additional sanctions on Russia, which has made it lose confidence in trading with Europe, increase its trade ties with Asia-Pacific countries, and turning to the Asia-Pacific region is one of the channels of Russia's pivot to Asia strategy, Chen Gang, a participant of the EEF, and who is also the director of the China-Russia Economic and Cultural Exchanges Center, told the Global Times on Monday.

A major difference of this year's forum compared to previous years is that most participants are from Asia-Pacific countries. Because border ports are closed to visitors, Chinese companies are mostly those in Russia, said Chen.

Due to the uncertainty of the European environment, it is a very good opportunity to accelerate the development of the Far East, and to accelerate the transfer of Russian trade targets to the Asia-Pacific region, he said, noting that the Far East will serve as a perfect springboard to shake off economic reliance on Europe.

In the first seven months of 2022, China's trade with Russia rose 29 percent year-on-year to $97.71 billion, as the two countries have maintained normal cooperation despite US-led Western sanctions. Experts attributed the growth to Russia's quickening pace in the shift of its economic pivot to Asia, and both sides aim to expand their economic and trade cooperation in the spirit of mutual benefit.

Zhang Hong, a Beijing-based expert on Russia, told the Global Times on Monday that a faster pivot to Asia strategy means a fundamental change in Russia's energy exports mix.

In 2021, about 200 billion cubic meters (bcm) of Russian natural gas went to the European market, whereas China's imports of Russian pipeline gas totaled a mere 15 bcm in 2021, according to media reports.

Zhang predicted that the figure will jump to 20-25 bcm in 2022 as the European market is now shut off to Russian gas.

Zhang said the attendance by top legislator Li also showed China's commitment of opening up to countries in the region to share the fruits of economic development, and its intention to shake off group politics and bloc confrontation from the Northeast Asia region.

While Russia has long considered itself a European country from historical and cultural perspectives, the Russian government first brought up the Far East strategy following a series of setbacks after Moscow tried to integrate into the West, and the strategy has become a back-up plan for its overall security, Xu Poling, director of the Russian Economic Office at the Institute of East European, Russian, and Central Asian Studies under the Chinese Academy of Social Sciences, told the Global Times on Monday.

Especially after the Crimea crisis, which put an end to US-Russia strategic re-engagement and the ongoing Ukraine crisis led to the decoupling between Russia and the West including Germany, there's almost little hope for Russia to go westward, Xu said.

"Now, Moscow has to change its strategy so that the current Far East development strategy is fundamentally different from in the past. If the West gave it some chance in the past, now it has tightened the shackles around Moscow's neck," he said. For a long time in the past, China's cooperation with the Far East has been led by local authorities in the northeastern regions, which were very active, but Russia was not in a rush to enhance cooperation, as the country treated its Far Eastern region out of security interests and not development interests, Xu said.

However, Chinese experts said today's political situation has meant Russia is giving economic engagement with China and other countries in the region a priority over security interests.

Zhao Xiangyu, chairman of Heilongjiang Province-based Liangtai Agriculture Co, told the Global Times that the natural complementarity between China and Russia is reinforced by global geopolitics.

Zhao, an agriculture trader who attended the EEF 2021 in person, said some resource-rich Western countries have subjected trade to politics in the past few years, and such a trend has added uncertainty to China's supply chain security, and this fact "has caused China-Russia trade and economic cooperation to increase."

The Russian side has also been wooing international investors, offering a free trade zone and tax-free policies in the Far East.

Chinese experts also saw Russia's pivot to the East in reshaping the geopolitical landscape as a multipolar world an irreversible trend.

On the panel discussions scheduled for Tuesday, topics such as shipping routes and investment in the Arctic region become a major focus, especially when the Arctic region has been strategically important for Russia after Sweden and Finland joined NATO, as Russia will face certain restrictions on its waterways to the Baltic Sea, and seeking more waterways in the Far North would be strategically important for Moscow.